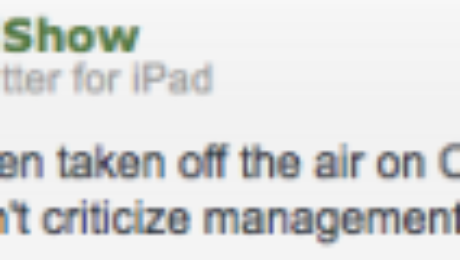 The transcript detailing what he said is below… In short, Dave Rutherford spoke out about a inadequacies and lack of resources when it came to providing information to Calgarians about it’s current emergency flood situation:

And so it’s our ongoing commitment to keep bringing you whatever we can on the Rutherford show. It’s the only program that is across the province, and therefore we end up covering Edmonton and Calgary and everywhere else that can hear us. Rob Breakenridge’s show is also running in the evening, because his program (is) also province-wide. So Rob’s show and the Rutherford show, the only two programs really that can get province-wide. And I say province-wide because I mean broadcasting into the City of Calgary.

You know, in my 42 years of providing news and information, it has been my commitment, my personal commitment, my professional commitment, to provide as much information as possible, as fast as possible, in all the radio stations I’ve worked for. Including Corus in Alberta, based in Calgary. My first main contact was CHQR radio in Calgary. But through the Rutherford show over the last 20 years we’ve been broadcasting across the province bringing you the latest, the most comprehensive, the fastest, the best — yes I’m going to say it, some of the best — coverage over the past 20 years.

So it is with profound disappointment that I have to tell you that Corus in Calgary has decided to direct resources in places other than information radio. For those of you listening right now in the city of Calgary right now on Corus, and I don’t know how many of you there are, because over the past four days you’ve been relying on information coming through 630CHED (Edmonton station) to bring you up to date on an emerging situation right around you. So I would completely understand if you went elsewhere for your information.

That’s an opinion, and I’ve been told categorically by management at Corus that my opinion is not being sought. My advice is not being sought and it is not welcome. So that’s fine. Corus management runs the radio stations they can make their decisions. It’s unfortunate the decisions ended up the way they are. And so for the forseeable future, you people in Calgary will be listening to a feed from 630CHED in Edmonton.

And I just want to tell you: the people at both radio stations have made a tremendous commitment to get information to you. They are in a no-win situation. The people working at the radio stations are professionals. They want to get the information out. 630CHED is in a difficult position. They have to provide information to Edmontonians about Edmonton matters. Things that matter to them: traffic, other infrastructure issues. All kinds of civic issues. But they’re going to have to water down their broadcast to provide something to try to keep Calgarians up to date a little bit.

It has been inadequate, it’s been disappointing, and quite frankly I’m… well, I’ll couch my language a little bit. I’m just very upset about it. Professionally and personally. And there are other ways I think information could have been broadcast on 770 but it was not.

And I’m sure that the Shaw family that is a very big part at Shaw, a very big part at Corus, is disappointed as well. We’ll do our part. We’ll do the best we can. We’ll bring you the latest and the most broad coverage we can on the Rutherford program.There are just four of us here, but we’re doing what we can. Coming up…”